Where it all started

How about a little field trip to where it all started? On Sunday I took a little trip over to Griffith Park to see the old Merry-Go-Round that Walt Disney used to bring his daughters to and supposedly its where he dreamed up the idea for Disneyland. I've lived in Los Angeles my entire and I've never been to the Merry-Go-Round before. 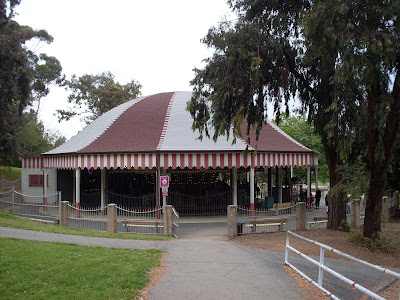 They've got a great player piano/organ playing wonderful tunes continuously even when the Merry-Go-Round is loading and unloading. Those don't look the type of benches Walt used to sit on (they have the actual bench at Disneyland) in fact those look like LAUSD specials! 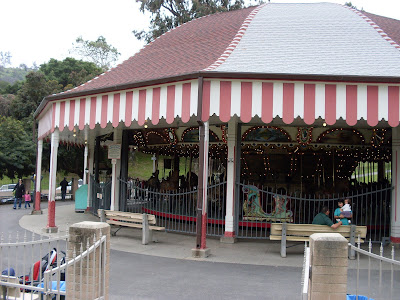 The overall condition of the Merry-Go-Round is, well, vintage and somewhat rough. 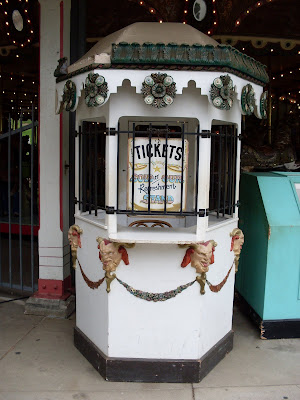 Wow, this reminds me of the Santa Monica Pier circa 1970. 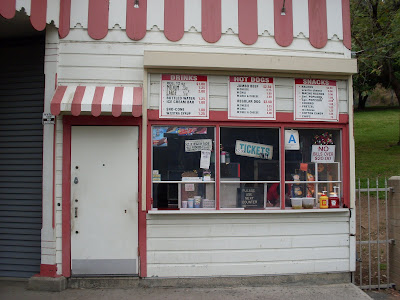 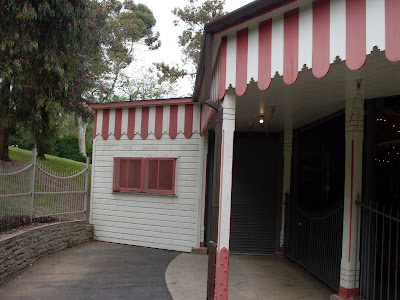 According to some articles on the Internet, this is one of the oldest Merry-Go-Rounds to have most of its original elements and paint, can't argue with that. 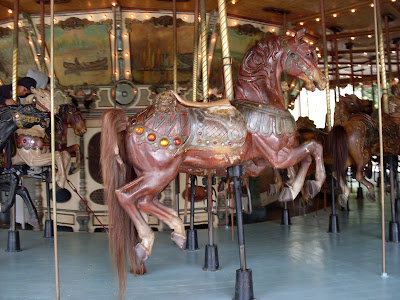 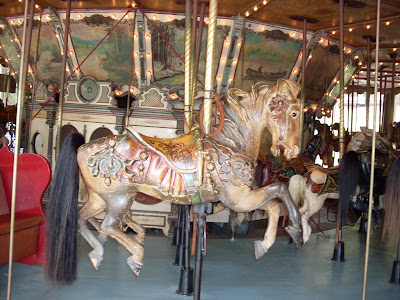 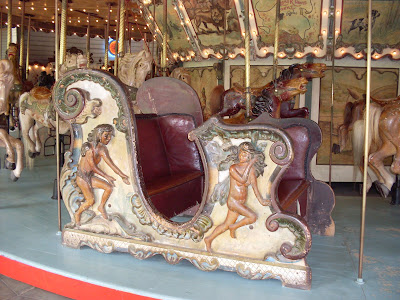 Interestingly, parts of the Merry-Go-Round have been restored, so its an odd mix. 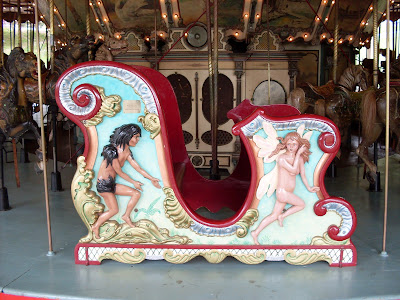 Well, look who restored this beauty. 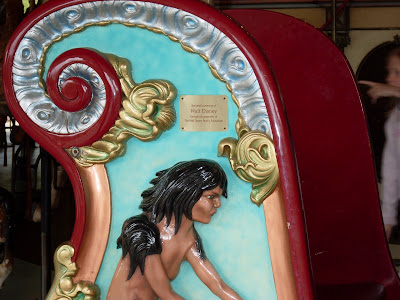 Some of the panels look freshly restored. Notice the covered area above the horses, pretty ornate and fairly rare, most Merry-Go-Rounds have the cams and support bars exposed. 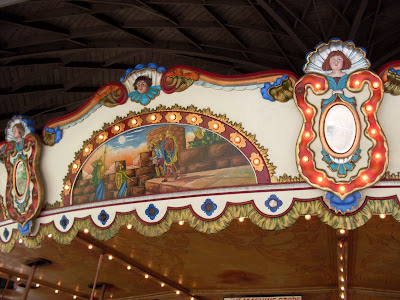 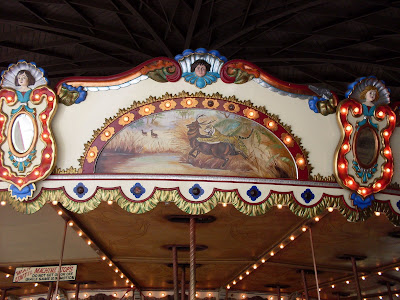 About half of the panels look like this, you ain't in Disneyland Dorothy. 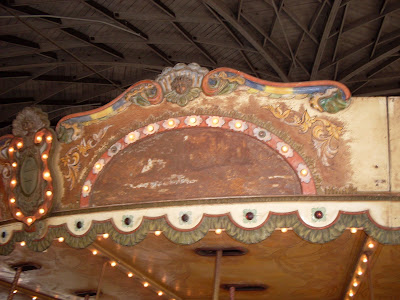 This wonderful musical instrument is hidden in the back, you can't get close or get decent photos, but man does it sound great. 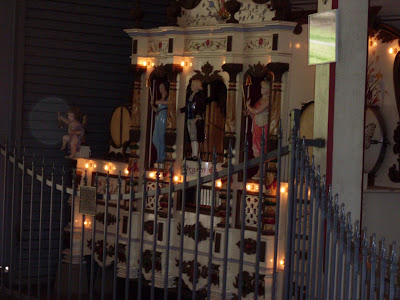 They've got some neat vintage photographs above the giant piano rolls, too bad its dark and so far away so you can't really see them. 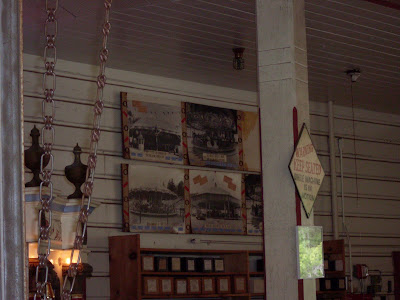 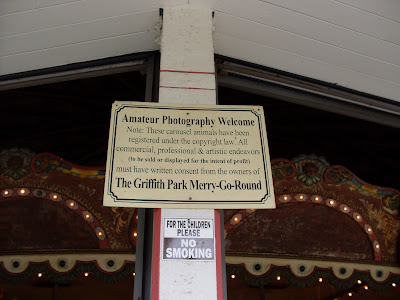 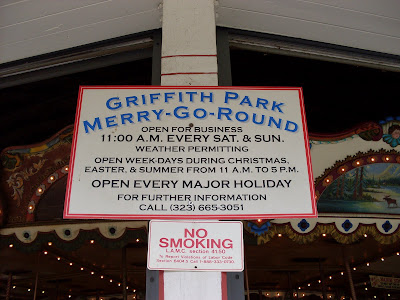 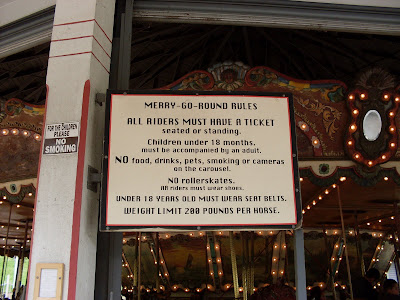 They have a display case near the old ticket booth, hey I have that “E” ticket magazine! I read later online that they sell that issue there. 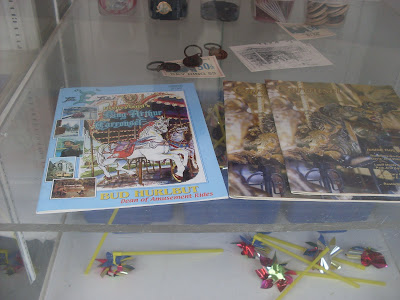 A few of the neato ceiling panels need some TLC. 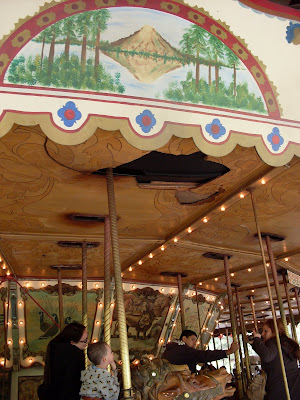 Here's a little video showing the Merry-Go-Round going round at full speed, take your Dramamine first then turn up the sound.

Here's what it looks like when its stopped. It really is a majestic old Merry-Go-Round, I was expecting to see a shinny “like new” Carousel like at Disneyland, but to my surprise, I got to see Walt's old Merry-Go-Round. If you live in Los Angles, go check it out!

Posted by Vintage Disneyland Tickets at 12:20 AM

Nice post. I have been meaning to take a trip there myself.

Fantastic post! I've driven by many times, but never stopped. I need to go check it out. Thanks for sharing this!

Great pictures of an Los Angeles landmark! I think a lot of people have never seen it - including me. I drove out to see it once, but it was completely covered in a tarp/tent! It looks like it could use some TLC, preferably by people who have the skills to do it right.

That one is on my list; I finally made it to the Steamers a few years ago. Although I believe in restoration, sometimes it is just as cool to stumble onto something in its original (albeit rusted and aged) state. See you Saturday, Tim?