Welcome to Disneyland in Slides December 1962 - Part Four. Sadly this is the last set of images from this batch. If this first one had more color and was brighter it would be post card worthy. Is he counting his balloon strings/inventory? 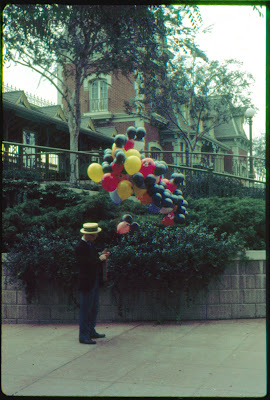 The next three are dull and lack sharpness, but this first one makes up for it with some construction walls in the background!!! 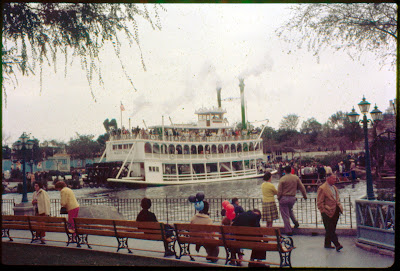 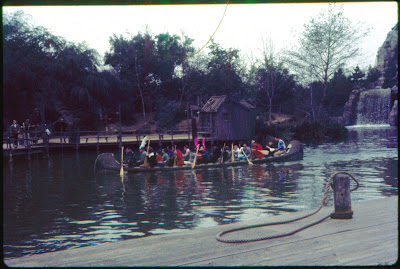 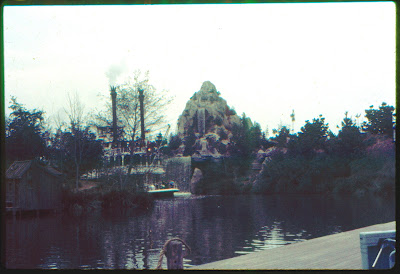 I suppose I never noticed, but did the band used to wear red uniforms in the old days and when did they switch to white? 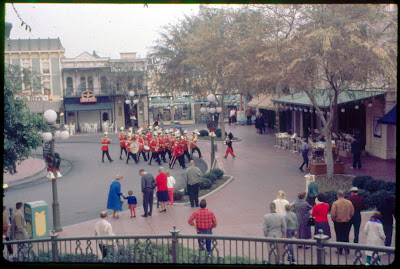 The band is heading through Adventureland? Ticket Booth on the left! Construction walls dead ahead! Are those for New Orleans Square in 1962??. 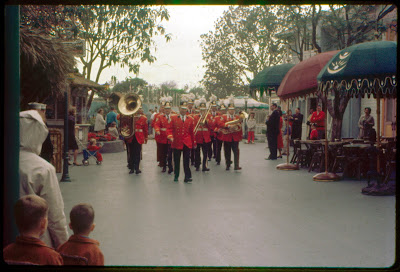 Here's where it all ends. The man in the lower right looks very familiar, is it possible we've seen him in other slides? Or does he just have that "Ive seen him before" look? 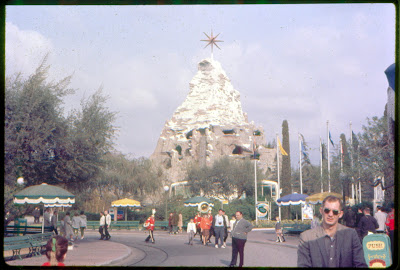 Believe it or not, the February 1959 set of slides (from this same photographer) are even better than these with one huge exception, they have lost almost all of their color, leaving lots of RED! Hopefully some will be worth posting.
Posted by Vintage Disneyland Tickets at 12:01 AM

These slides continue to excite me – so many details! I especially like the rare shot of the NOS construction wall as seen from Adventureland. Again, great find!

The 5th photo down /band on main street/ oh my.. a full front on of the Hills Brothers! Oh my, such joy you bring this morning. Coffee is good. Coffee sitting right there is the best on earth. I so miss the coffee garden(s)in any of its forms. Inside the berm, it {is} was my number 1 spot to just sit, have a sip and watch happy people pass by. For me, if Disneyland is 'the happest place on earth', then right there on that little patio is the epi-center of all that statment stands for.

More great stuff. You could have posted three a day and stretched this series out for a lot longer!

Notice that Mickey is leading the band to the front of the Opera House, where there are chairs and music stands. Early on I've seen the band also wearing dark blue uniforms.

The balloon seller is trying to keep the strings untangled I'll bet!

And I agree that the construction walls in pic #2 are interesting!

Thanks VDT for a special trip, and Thufer for summarizing my thoughts so exactly.

I remember the "Black Ears" balloons... they didn't last very long, did they? Does anybody know if it was a cost issue, or a problem getting the two different rubber parts to remain air tight?

That Opera House shot shows the shoe shine guy! And there's a Monorail poster on the wall of the opera house!

What a nice lot. Thanks for the look, Tim.