I’m guessing this is from 1995 based on the "Narration Attractions" information. Also that would be about the time Delta ended its sponsorship (link).

And just because you’ve been such a good blog reader, here’s a Thank You card from Jiminy Cricket. 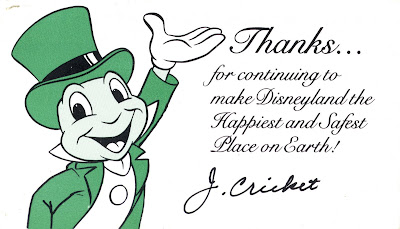 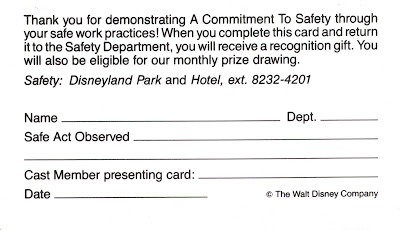 Posted by Vintage Disneyland Tickets at 12:08 AM

I don't think America the Beautiful had it's comeback until 1996 (after the 40th Anniversary.) I have some photos of the new exterior sign and banners as well as some preshow shots. They are on my "list" of items for future posts!

I was glad that Disneyland did bring that back for a short time. The REAL reason for America The Beautiful's special return, was that construction for the ROCKET RODS came to a halt when the sponsor pulled out! GM was not happy that Test Track in Florida was not functioning well, and the testing of the Rocket Rods was also have a great deal of trouble up at MAPO/WDI, so GM said we are not gonna have TWO new-non-working attractions on both coasts.

The film Disneyland guests saw in 1995, was the Walt Disney World back up print.....of the 1975/76 edition of America The Beautiful. The Disneyland prints no longer existed - in fact they were cut up and given to employees and Imagineers. The WDW backup prints used had deteriorated in some spots.........remember the St. Louis arch segment??.....in the 1995 showing, we were all looking at a still image of that scene as a good portion of that was in such bad shape. a few other segements were also tweeked a bit due to damages portions of the film. I have some great shots of the Circle Vision projectors and a hand full of the America The Beautiful film segments I plan to post down the line on TomorrowLounge.......right now I'm focused on Mission To Mars.

Those flyers came in about 4 colors. Anne Tryba from WDI Graphics spent a good deal of time reseraching the entry graphics and colors ffrom the 1975/76 theater entry to recreate similar colors in the 1995 entry.........to bad we can't get a "return engagement" of the PEOPLEMOVEr!!

I would have loved to see the return engagement of "America the Beautiful"! Mike Cozart, I hope that if the prints of the films are gone, that Disney has the original negatives somewhere. Can you imagine how cool it would be to see "A Tour of the West" 60 years after it was filmed?

The return showing of America the Beautiful lasted from July 11, 1996 through September 7, 1997. Remember my Circle-Vision post?! :)

Mike -- Thanks for the additional information on the AtB return!

Wow, thanks for all the info Mike!

Disney better still have the negatives!

Your post stated: "the 1975 version of American Journeys returned, running from July 11, 1996 through September 7, 1997..." I thought this flyer was for "America the Beautiful" not "American Journeys?" were they the same film?

Possibly Delta pulled its sponsorship sometime in early 1995? Then it seems logical that the "Narration Attractions" division started shows just after that using the "America the Beautiful" film from WDW as Mike C. stated?

Yes! Disney keeps the master negatives. The "play" reels are printed to use and play in the parks. Each park would get (two) sets of each reel.....so Disneyland and Walt Disney World would have 18 reels during the time the films were being shown. This was true for American Journeys.... Becuase of space Disneyland did not have a second reel set for Wonders of China. If somthing went wrong, they would just show American Journeys all day (at Disneyland) If there was a flaw, a section from a "splice" reel could be ordered from Florida (EPCOT CENTER) where duplicates of Wonders Of China originated from.

Does anyone rememember the American Journeys merchandise sold at the theater's exit --the first fixure of the Premiere Shop?? This haped when Delta began it's sponsorship -I don't recall the date. As nerdy as it sounds, I bought and still have the shirt and drinking tumbler with the "Delta Destinations Magic Moving Mural" (from the lobby/preshow).....and the plush of Dusty the Delta Ait-lion. I wish I also got Wilbur Bear........Dusty's sidekick. I remember there was also a puzzle or the mural, a poster that you colored with marker pens of the mural, Delta hats and a few other items.....mostly with Dusty and the "magic" mural. Does anyone out there have the music that played for this mural that would "come alive" as points and cities were called out? The music also feature a chorus of singers who now and than sang along not in wordls but "doo-ddo-dah, dada dooda..."etc. ?? I miss that mural!

When WDW's "Magic Carpet 'Round the World" was updated for Tokyo Disneyland, there were plans to bring that edition to Disneyland as well. That's when WED decided to redo the "America The Beautiful" film.....first proposed as "AMERICAN SPIRIT" as it would focus more on the American PEOPLE in the places as opposed to just the places. By production time the film was titled "AMERICAN JOURNEYS" (DL sponsor was PSA AIRLINES and later Delta) (WDW's sponsor was Black & Decker and later Jiffy Pop).......of I made the Jiffy Pop part up------just seeing if you were all following along!