Here’s Vintage Disneyland Ticket if ever there was one! ScottDisney, a friend and contributor to the blog has decided to sell one of his very rare tickets. You can view the eBay listing "1955 Disneyland Opening Day Ticket — Serial #000003" here (link). In the spirit of full blogger disclosure; I am in no way connected to this auction and will not profit from it, but I might bid on it! 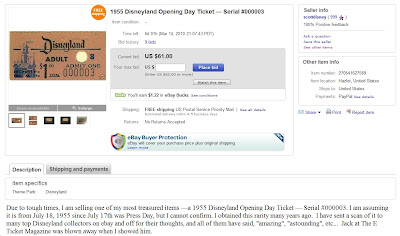 A potential bidder asked if there is proof that this ticket is from July 18, 1955. That’s a pretty fair question given the rarity of such an item. Of course it would be difficult if not impossible to prove with certainty that this ticket is from July 18, 1955. ScottDisney offers this answer as to the lower serial number and the possibility of it being repeated as some individual attraction tickets may have been; “it is my understanding that Disneyland kept ‘stricter’ records of the admission tickets rather than the ride tickets”. 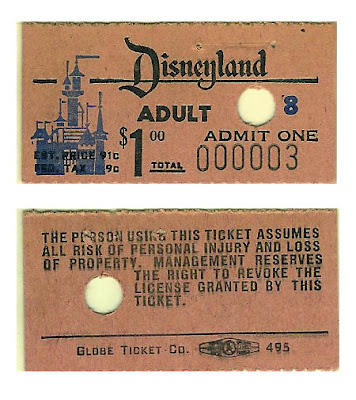 I’ll offer up a couple of supporting facts on the July 18, 1955 premise and then please feel free to comment on your thoughts. 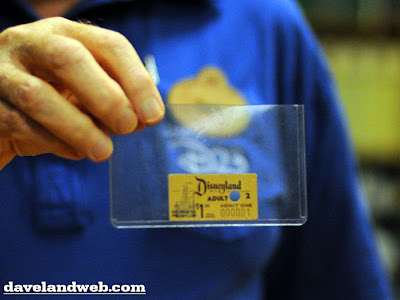 Now is where it get’s interesting. Below is a scan/color photocopy of a page from the "ticket binder" that was once kept at Disneyland. From what I have deduced, the ticket binder was originally used to reference the various types of ticket media that could show up at the park. After 1982 it was updated and used to help identify/qualify/quantify the eligibility and value of the old tickets to "redeem" them towards a new Passport (link).

Check out the top center ticket, I think we have a match! Not just a similar ticket, but the exact same one. All you Sherlock Holmes out there do some comparisons, the color is off (Color copiers in the 90's were not so good) but you can tell by the staple holes and other unique characteristics that this is indeed the same ticket. So we know at least that ScottDisney's ticket was from Disneyland and its old!
The ticket binder page shows a 90¢ ticket as being "1st", however the 90¢ tickets came later after the Federal Admission taxes were repealed sometime in 1956 (link). Here you can see a 1955 flyer (link) where its $1 for general admission. 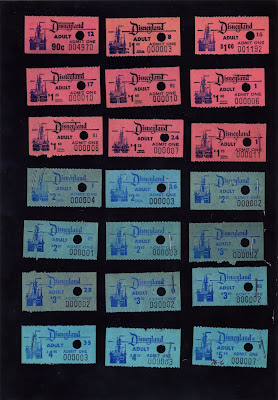 Is this ticket from July 18, 1955? I would guess more yes than no. It may have been "pulled" from booth #8 on July 18, 1955 for the sample book and hence never used (kind of like Roy's ticket #1). From what I have heard, the admission tickets (stub or ticket book type) were usually torn in half at the main gate, so any un-torn admission tickets must have never been used, making them all together pretty rare.

Vintage Disneyland Tickets, I hope you can snag this one!

That is one rare ticket. Thanks for the glimpse into the past.

Here's my two cents. As you can see with the ticket book samples, there's no consistency with the ticket numbers, ticket booths or even a timeline (i.e. the 90 cent ticket comes first in the book). Rather than being an accurate timeline for archival purposes, this seems to be just a sample book that a cast member was asked to put together in order to represent the various tickets that were issued in the past. Just like the potential bidder on Ebay, I have some single digit and double digit attraction tickets. And I know other collectors who have them too. I always felt these were not as rare people made them out to be. Also, I have the same admission ticket that's up for auction except it's numbered in the teens. Now was that issued on July 18th? Although impossible to say, I always assumed it WASN'T issued on that day. I always looked at mine and thought it could have been issued on any other day in 1955 when they started a new roll of these early, generic looking tickets. "It is my understanding that Disneyland kept 'stricter' records of the admission tickets rather than ride tickets" - If this sample book is considered the Disneyland standard for strict, can you just imagine what their other records look like??

I did see this item on ebay; it is undoubtedly an early ticket, and that alone is neat. Anonymous #2 makes a lot of good points. The staple mark is interesting, just like the ones in the reference binder; Roy's ticket is yellow, whereas the ebay example is a salmon color, not sure if that is significant.

I just noticed the top bid on this item is a brand new id with a zero feedback. With the bid retractions, I sure hope the top bid is legitimate.

Interesting, I just found in my grandmothers old scrapbooks 3 International Press Preview tickets.... wonder how much those could be worth.

I have a main gate adult admission ticket..unused..pink in color with the castle emblem in the upper left corner. Ticket # 006959. Price was 90cents! I have never seen another one like it with castle i left top corner and NO HOLE in ticket. Any ideas of its $$$

Check this man's site to see if ebay offerings are genuine. http://www.keeline.com/DLTickets/

What are dollar day passes worth the vintage pink tickets

I am curious how much the first day tickets are worth or sold for.