Time for a small (ok, not so small) trip report. I arrived at the park at 7:45am on Thursday and the lines at the main gate were not to long at all. While in line the overhead music was playing (as usual) an in between Winnie the Pooh and When you wish upon a star they player this song shown below. I tried to record it on my camera, but all I got was crowd noise. I’m thinking I was the only person in line that knew it was the Elliott Brothers! Very nice touch Disney, even if 99.7% of your guests have no idea what’s playing.


On my usual run to get breakfast at the River Belle I spotted this cast member with an animal cage and it appears to be moving!!! I wonder what was in it? Probably unrelated, but when I first came thru the gates, Disneyland Security was walking around a “K-9” German Sheppard., both kind of odd. 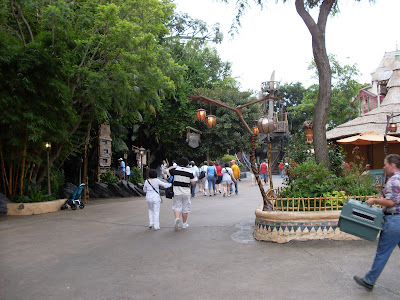 I had a strong craving for pancakes and Laura was making me a fresh batch. If you time it right (5 minutes after the park opens) you will always get fresh pancakes! Laura has worked at Disneyland for 23 years and has been at the River Belle for over 10, be sure and say “Hi” to her next time your there, she is really sweet and makes some mean pancakes. 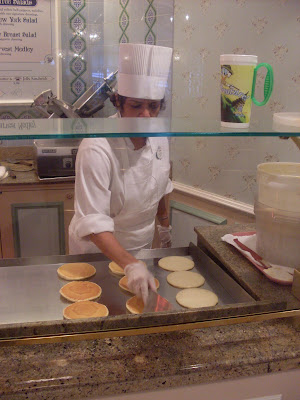 Believe it or not it was still a little cool and overcast at 8:15am so I ate inside, I do love this view. 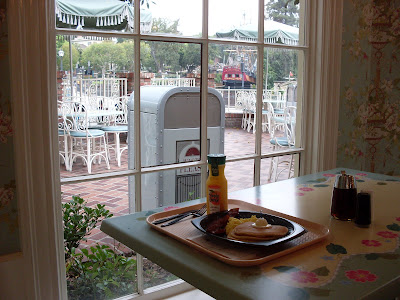 Even in overcast weather the River looks great, helps that no one is on it! 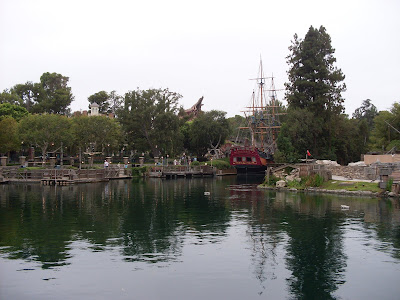 I like how the Mark Twain “warms up” its engines for a while before the first journey of the day. 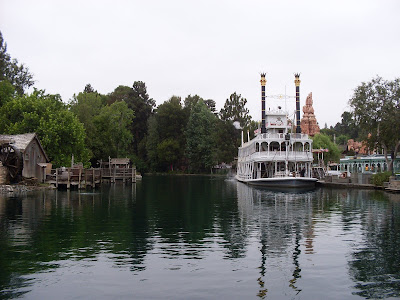 Interning choice of flooring…. They could have done a better job with the “blending” but I bet they figured you rarely see this anyway, there’s usually a mob scene here. 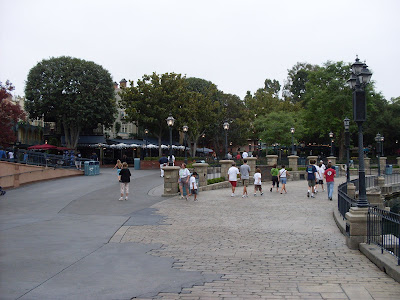 How about some tranquil flowing water? It was so quiet on the backside of Thunder Mountain that I hung around for about 10 minutes just soaking it up.


I call this one “weeeeee”. 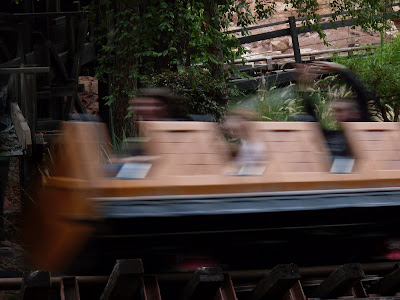 For TokyoMagic, a nice theme going on here! 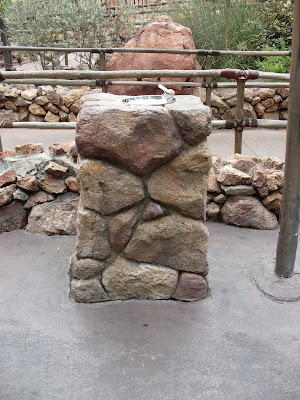 Wow, even the ashtrays have there own theme! 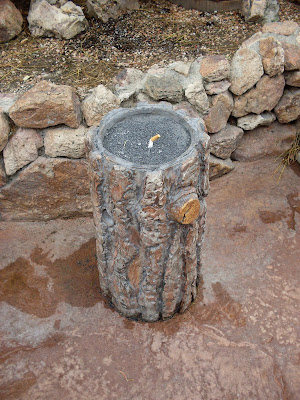 This theme is a little out of place, but no doubt it’s a necessity. 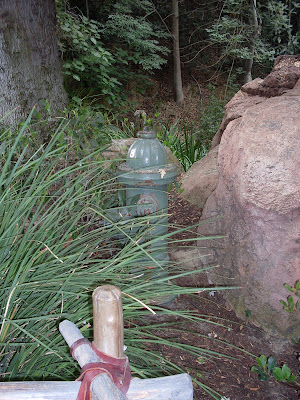 Some very unhappy guests. The “lady” guarding the gate gave no answers as to why it was closed or when it would open, just “Please walk a ¼ of a mile out of your way to get to Fantasyland”. 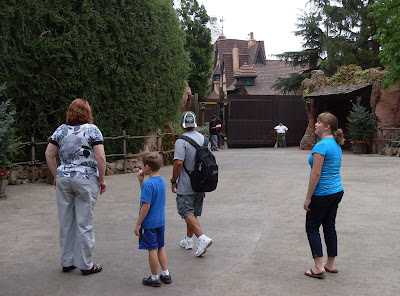 The theme in the back park of Thunder Mountain really is extensive and somewhat overlooked. 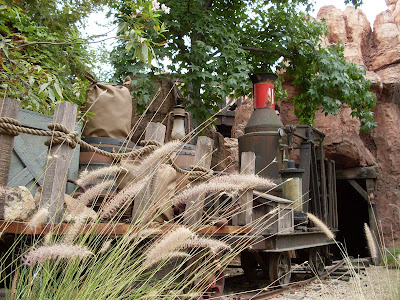 These appear to be new and not very summer like. 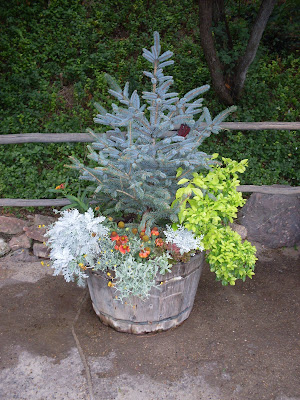 One of the bridges over in the Plaza Gardens, the “middle” bridge, is getting much needed repair work, it was literally rotting away (link) and (link). I heard it might get replaced entirely. 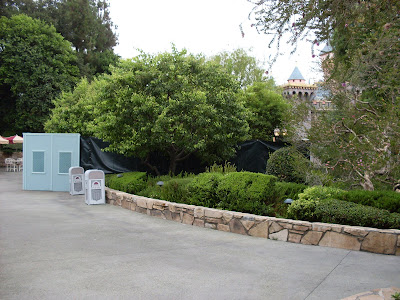 Let’s hope they don’t replace it with a bridge like this Home Depot Special they recently did on one of the other bridges. 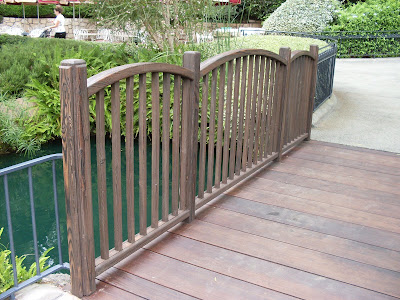 I turned to get a photo of the castle and saw this! I hope this just happened and has already been fixed? 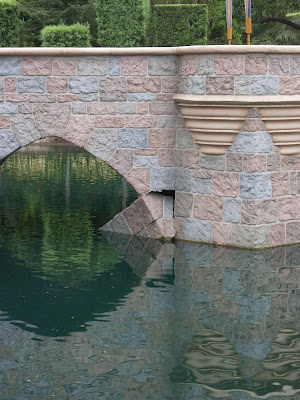 As seen from the other side, the broken off chunk appear to just be cosmetic (Paper Mache?) the rebar looks to be ok. 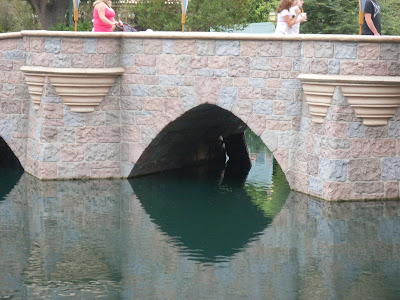 As a tribute to Michael Jackson, here is the rock he stood on while singing When You Wish Upon a Star from the 25th anniversary special (link). 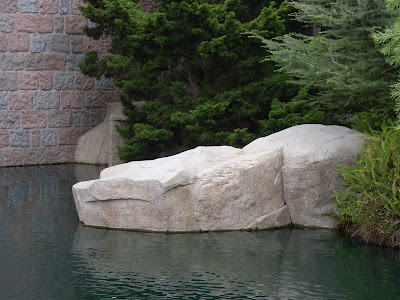 I never noticed this fun life preserver before and I freely admit I want it! 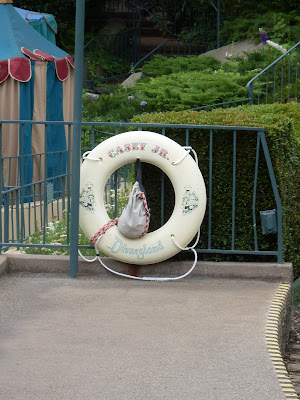 “One Day” Daveland and I are going up that hill, we may lose are AP’s or just get kicked out, but I gotta get up there. 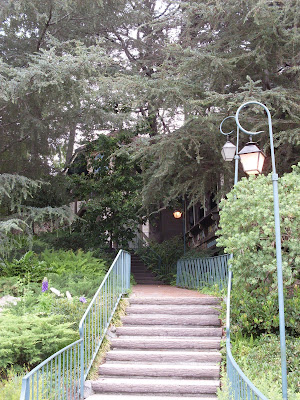 The backside of Retroland. Just outside of the frame on the right was a man feeding the ducks and taking pictures from the dock. I went do to say hi and realized it was the infamous “DarkBeer” David Michael. David takes amazing photos of Disneyland and is a self described “theme park reporter”. Check out his work on Smugmug (link). David also writes a weekly column for Miceage “David Michael in the Park” (link). It was super meeting him, a very nice man, sort of a hero to me; I’ve been following his photos since before I started my blog. 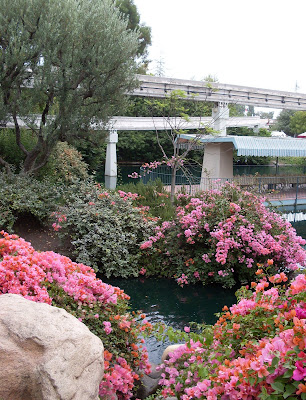 Around 9:30 the parks starts to swell up, time for a brief rest here. 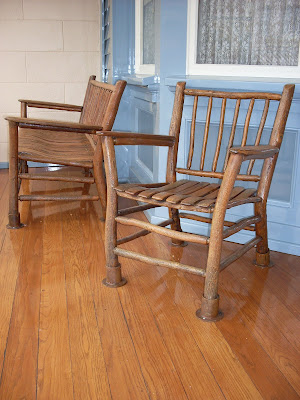 Its fun to sit in those chairs for a few minutes and watch the masses go by, you really get an interesting perspective from this chairs, its surprising how narrow Main Street really is. 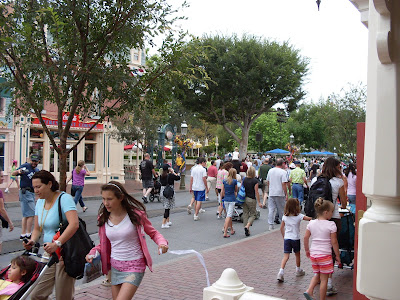 OK, this last photo is pretty useless, it’s just an excuse for me to talk about the Gully Whomper Keel Boat. She’s there off to the left in this photo that was taken from the moving tram. I walked back to the parking lot (dang that’s a longer walk than it looks) to get a better look at the Gully Whomper. I was going to try some photos from the path, but I had a feeling I was being watched.

I did get a good look thru the break in the fence. Her hull is bright yellow fiberglass and looks pretty shiny & new, her rigging, latter, lanterns and all the goodies appear to be in place and in decent shape. Yes she is just sitting backstage up on blocks, but I have a feeling something is going on. I’m stepping out on a limb and predicting you will see the Gully Whomper sailing the Rivers of America for Disneyland’s 55th Anniversary. I know, I hear the laughter and Nah-Sayers now. Just remember, among laughter and jeers I predicted the Sleeping Beauty walk thru would return, so just maybe I'm on to something… 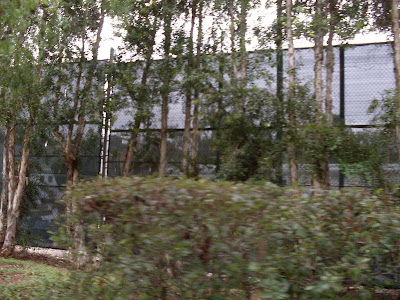 Can they really repair the bridge that quickly? Wouldn't they have to drain the moat?

Love the reports! You need to go to DL more often.

Thanks for another great trip report! The castle photo is amazing, those fake stones are so convincing that it makes me forget that they are just a "movie set". And the Casey Jr. life preserver is a detail I have never ever noticed before.

I can't imagine why that walkway was blocked off, but I definitely would not have messed with that guard!

I can remember seeing holes in the walls of both the Buzz Lightyear and Matterhorn queues and those went unrepaired for MONTHS. I wonder how long the castle bridge will stay this way. On one hand, it IS the castle, but on the other hand I can see them removing that piece and figuring that it isn't all that visible. If it remains for very long, you'll be hearing me say, "BAD SHOW, BAD SHOW!!!"

The sagging masonry panel is probably a fiberglass veneer they put up over a cinderblock core. The adhesive probably failed. It should be an easy fix.

Ditto on that new bridge, it looks too Home Depot.

LOVE the report and the blog! I'm thinking the Gullywhomper will be used for the new Princess and the Frog meet and greet? Just a guess! :P

Nice report. Just wanted to shed some FYI for everyone. The live preserver has been around since around 2009, but wasn't really themed before. It has recently changed to be more themed. Life preserver's have been added to many areas around the water ways.

That xmas tree on the Big Thunder trail has been there since xmas time. No idea why they have left it there.

As for the Cast Member with the animal cage, they have a live bird in the cages directly above the entrance to Jungle Cruise. I betting that's what it was for.