Here’s a fun little “fact card” about Star Tours. I’ve got several of these little cards; they must have been for cast members to learn about the attractions. 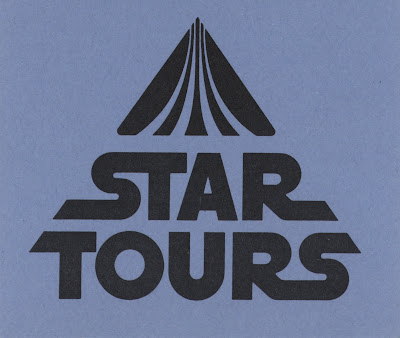 Some interesting “facts” on this side of the card, I would dispute the Grand Opening date of January 9, 1986 however, I don't think they build this attraction in three months. The Audio/Video system was Videodisc based, do you think it still is. If it is, who do I beg/bribe to get one of the Videodiscs when they update Star Tours? 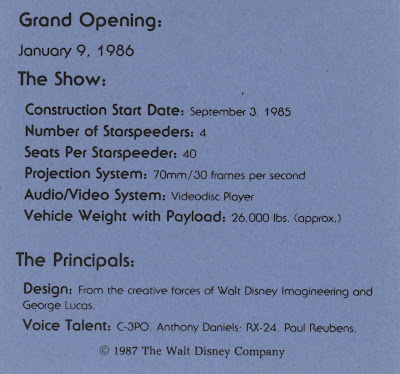 Wow, lot’s of information on the inside. Impressive celebrity list, could a new attraction get this kind of reception today? 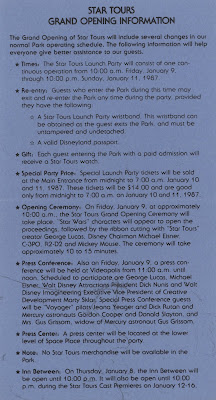 This “glow in the dark decal” is technically a sticker, but boy is it cool. It still glows nicely. It’s made of some weird space-age foil material; in fact, the area outside the stickers is even cooler than the sticker itself. 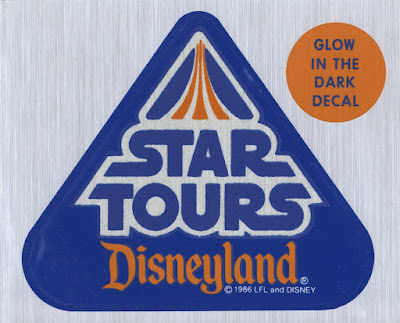 Since I’m feeling guilty for never having seen Pete’s Dragon, here's some love for the silly old dragon. 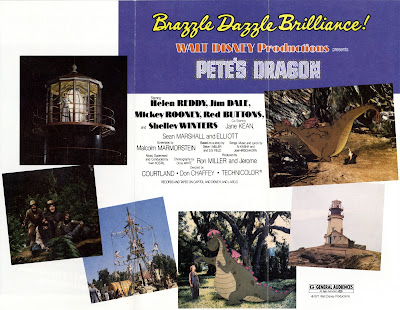 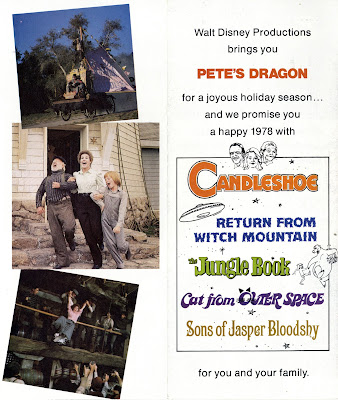 Christopher said...
This comment has been removed by the author.
Thursday, 04 February, 2010

That would of been an awesome event if it really began JANUARY 9, 1986!

But no, I was there all night, both nights... fortunately, it was only for the one weekend in 1987.

Nice post, however, just time I visited Disney World was roughly that pagan holiday, Christmas, and the place was too busy. I liked Epcot more.

I wonder why it says, "Note: No Star Tours Merchandise will available in the park."

Also, I wonder if RX-24 will be in the new version and I wonder if they'll ask Paul Reubens to provide the voice again?

It may have been originally slated to be video disc based, but when I saw a backstage tour of it in the mid 1990s, it was film based. The film snakes along the back of each of the ride vehicles.

Tokyo: I hope Paul Reubens is asked back. His voice work for the robots was absolutely fantastic! (Note exclamation point)

It *would* be nice to have Paul Reubens again. Continuity!

I was wondering the same thing as TokyoMagic!, why "no merchandise"??

And I haven't seen "Pete's Dragon" either; I don't even feel particularly bad about it!

Since the main part of the attraction is a film, and not something that physically has to exist in the building itself, the notion that the actual construction of the building and installation of the audio-animatronics and the simulators themselves (which were modified from existing simulators and did not need to be built/designed from scratch) took about three months is not all that far-fetched.

Matt, or it could have been originally on videodisc and switched to film by the time you saw it in mid 1990s for any number of reasons.

I was there during the opening weekend (lasted a full 30+ hrs before calling my father to pick me up).

The handed out 'Star Tours' digital watches at the main gate - I still have one mint in the bag.

I rode Star Tours during a soft opening - I'm guessing this was in the fall of '86?