Magic Mountain’s Red Badge of Courage and a Construction Photo

Time for some vintage Magic Mountain fun. This little card appears to be part of a promotion or contest called “Magic Mountain’s Red Badge of Courage”. The Troll looks dizzy, blame the Crazy Barrels and the Spin Out! Since the Log Jammer is now permanently closed (how sad it that?) there are only two attractions on this card that are still left at the park; Gold Rusher and the Jet Stream, both are excellent rides! I’m thinking there’s an iron on patch or a pin out there somewhere that looks just like that circle with the Troll. 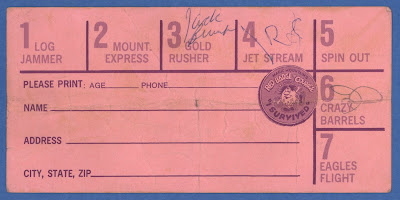 This next picture is unrelated to the card above but boy is it exciting! Once again a loyal and dedicated blog reader has sent the blog some amazing images. This is one of 12 personal Viewmaster photos taken of Magic Mountain in its early construction phase (The park would open in May of 1971). I recently visited the Mountain for some before and after shots so you’ll be seeing those and the vintage construction photos over the next couple of weeks.

An after shot of the scene below is virtually impossible today, blame Tatsu! I’m going back this weekend to see if I can get this shot from the Tatsu load area (I might even ride it, maybe…). Let’s examine this shot taken approximately from the base of the yet to be completed Sky Tower;

Dead center; under those yellow tarps are the "Funicular" trains (currently "The Orient Express") with it freshly graded double track and custom lower station. Moving clockwise; the structure with the stone chimney is the "Coffee Grinder" (today’s "Cyber Café"), far left; the “Feather Merchant” (now the "MPorium" - link); center back; the main bathrooms and the ticket booths to the right of the bathrooms, next is the "Holiday Bazaar" merchandise store, then the "Gazebo" and lastly to the far right; the "Grand Carousel". 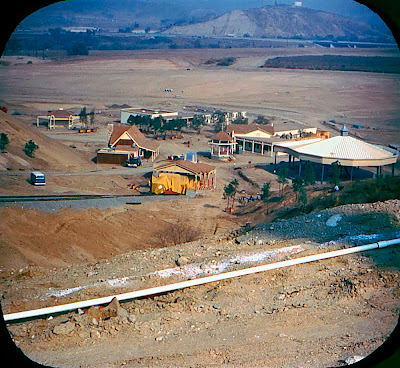 What’s really amazing about this picture is that with the exception of the ticket booths, every structure in this photo is still there. You’ll see them all in detail in the next couple of weeks.
Posted by Vintage Disneyland Tickets at 12:01 AM

So was that the train that took you up to the old Magic Pagoda (or was it the "Pearl Pagoda")? I hope you can get a "now" photo from near the same spot!

Yes, I'm looking forward to more too. I still want to go to M.M. and ride the Electric Rainbow.....or whatever they're calling it today. I wonder if it's days are numbered? I definitely need to get up there before they destroy the park even more. BRING BACK THE MET....oh forget it, I give up!

I have the patch! Anyone want to see it please leave a message and I will post.