Taking yet another look at some Magic Kingdom Club goodies, here’s a fairly rare Junior Magic Kingdom Club ticket book from February 1974. This is the last issue of the larger style tickets (this ticket book is the size of a dollar bill) Summer 1974 would see the introduction of the smaller (and less exciting) ticket books that would remain until Spring 1982.

This particular ticket book is marked “Employee Discount Books” so technically this is no longer a Magic Kingdom Club book and was probably even cheaper that the club price of $4.75

Eleven Magic Key Coupons are included with the admission ticket. The “Junior” designation is no longer used at Disneyland, some ticket collector guy should know when they stopped using it???

Inner Space, Flight to the Moon and the People Mover make me dream for this Tomorrowland – American Sings grand opening is still a few months away.

Planning a trip to Disneyland in the first half of 1974? Here’s a calendar to help you plan your trip. 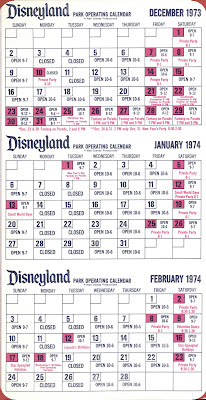 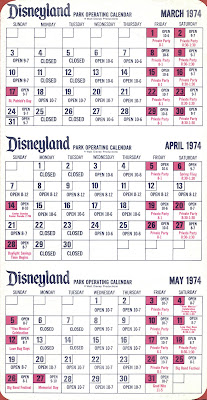 70's Disneyland doesn't get as much love as it deserves. The park is definitely Post-Walt but had the financing to expand and improve *following Walt's template*