From the Magic Kingdom Club vaults (that's the shoe-box) here’s a 1967 Membership Card. The castle appears to be very similar to the 1966 Membership Card, but this castle has some abstract shading – a security feature?

Usually the organization is a corporation or a union, this one appears to be from the Disneyland Recreation Club, what’s that all about (Jason?). 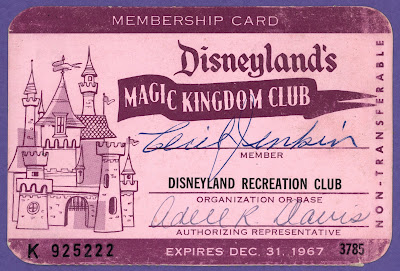 New for 1967, 10 percent discount on merchandise! But only at Disneyland Operated Shops & Stores? How were you supposed to know the difference? 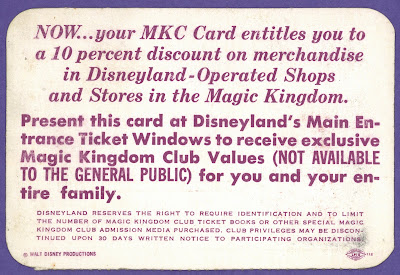 This is one of the special ticket books you might have purchased with your 1967 Membership Card. Dated October 1967, it’s missing the admission ticket (naturally) which is too bad because unlike the Globe tickets inside, the admission ticket was the rare castle and star paper.

The Magic Key Coupon was the Cadillac for Disneyland attraction tickets. Good on ANY ride or attraction, A thru E!

These ticket books could only be purchased in the off season. During the summer, you only got a couple extra regular tickets in a standard “A thru E” type book. If you went frequently however, you could buy these books in the off months then use them in the summer, the never expire!

You’ll find me in the New Tomorrowland ’67!

The admission ticket would look pretty much like this, although this one is from 1974 and the main gate admission alone is worth $4.50!

How do you know that the October 1967 ticket book's admission ticket had castle and star paper if it is missing? You must be some kind of warlock! ;-)

I believe Disneyland employees could get memberships through the DRC. I'll have to check that when I get home--and see if Cecil Jenkin(s?) is in the thesaurus.

Disneyland Line (2/21/1973): Cecil Jenkins, Animation Mechanic in Maintenance Department #734, retired last week after seven years of service with Disneyland. Cecil thanks all of you who attended his retirement party and gave him so many gifts.

Disneyland Line (7/4/1973): Although Magic Kingdom Club membership Cards have been available to Disneylanders for quite some time, the week of July 16 - July 22 is being set aside at The Center to familiarize you with the advantages of MKC membership. There will be representatives from the Club at The Center from 2:00 p.m. until 5:00 p.m. during this week to answer any questions you might have about the benefits and to give out Membership Cards.

Also, in Spring 1967 Adell Davis was the Production Assistant for Backstage Disneyland.

Based on the time it took me to originally compile this information, that will be $231,955.22, payable immediately with Disney Dollars.