It's time for a Walt Disney World post. This "Special Adventure" ticket was good for Admission and transportation to Treasure Island, "Bay Lake's Tropical Island Paradise".  This ticket is undated but is on ticket book stock and probably was part of a ticket book, so I would guess its from the late 70's.

Treasure Island (later named "Discover Island") intrigues me, it's been closed for fourteen years yet it sits there just like "River Country" right next door, closed and abandoned.  You wont see Treasure Island in any Disney Florida promotional (propaganda) materials that's for certain! 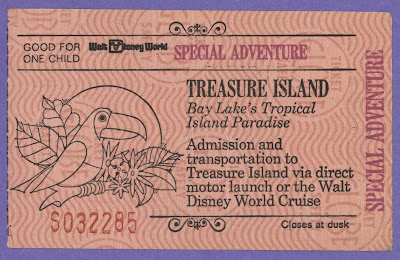 From Wiki:  "The island opened as Treasure Island on April 8, 1974, as a place to observe wildlife, and was later renamed Discovery Island when it was recognized as a zoological park. It closed to the public on April 8, 1999, but continued to operate until July 9, 1999, at which point all of its animals had been relocated to new homes at Disney's Animal Kingdom (whose Safari Village hub area was renamed Discovery Island) and other zoos. After its closing,

Disney considered teaming up with the makers of the Myst video game to create a cutting-edge interactive experience to be called "Myst Island". Guests to the island would explore unusual locations and unravel a mystery about the island's previous inhabitants. However, development of this attraction never got beyond the concept stage." 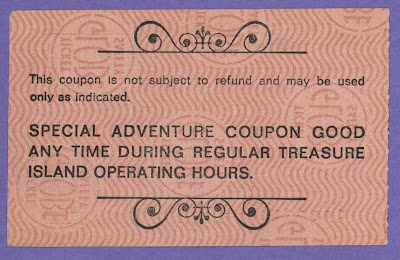 Very cool, I read about Treasure Island on the "Passport 2 Dreams" blog. And the idea of a "Myst Island" is intriguing, though I don't know how they could have done it and maintained the creepy atmosphere!