Here’s a fun look at a “couples” ticket book from Disneyland’s past. From June 1965 this special “Starlite Nights” ticket book was for couples and I’m guessing intended to be used on “Date Nites”. This first scan was donated to the blog by “anonymous” from his secret lair, thank you sir! How cool is that double admission ticket? Notice the “Special Main Gate Admissions” are good after 5pm only. Even the back of the book is outstanding, the crescent moon and stars are a nice touch. 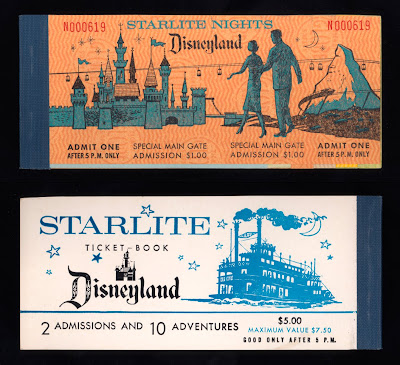 From my collection we’ve got a partial book with a couple of “A” and “B” tickets left, the smart couple used all the good tickets. Since this is June 1965 we are still graced with Walt’s stylized signature, although the trademark purple has been replaced with “Starlite Blue”.

The tickets are regular lettered tickets except the letter is again blue not purple and of course that super cool Castle & blue moon logo make these tickets special and good only after 5pm! 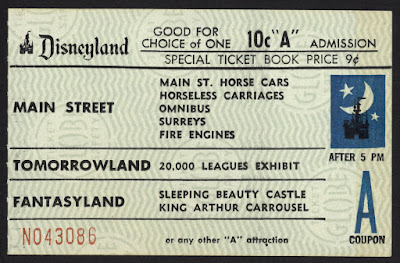 The Tomorrowland Jet(s) and the Art of Animation have about a year left. 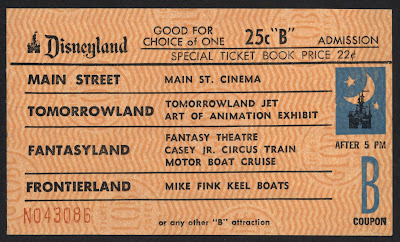 These tickets we good only after 5pm (yea that’s the 3rd time I said that) but they are also only good during the "regular summer season", in fact, they’re VOID after the summer season, so there. 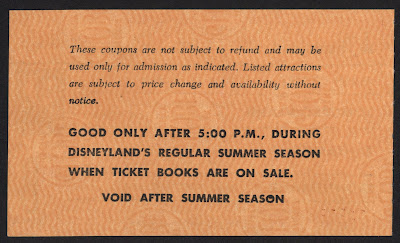 Here’s an “E” ticket from a post I did back in 2008 and I’d rescan it but I can’t find it at the moment, I’m working on a special project and my tickets are all over the place!

The “sister” book to the one in the first scan recently sold on eBay for $500, I didn’t even bid on it! 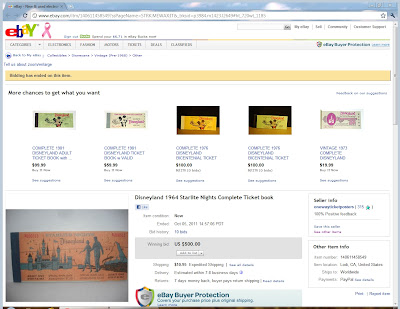 The ticket book is actually quite handsome.

I noticed Snow White's Adventures are not listed as "Scary" yet. That came later. :)

I have to go back through my stash. I know I have a few complete books from that era.

As a 10 year old at the time, I had heard about "Date Nite" and could hardly wait until I was old enough to date!!! Unfortunately, by the time I was old enough, they no longer offered this option.

Tim, do you have any idea how many years the Starlite tickets were available? It's kind of a cool idea. Of course, with AP's there's no point...

How dreamy :) I can only imagine how fun this would be. That night sky sure is romantic!